A few months ago, Shannon and I were watching an episode of The Mindy Project (shut up—it’s good!), and there was a scene where one of the characters was sitting in his boyhood room at his mom’s house. Just over his left shoulder, in the background, I saw a green blob.
“Oh my God,” I said, scrambling for the remote. “Is that what I think it is?”
“Wuzzat?” Shannon said, waking up.
I paused the DVR, backed it up a hair, hit PLAY, paused again—and then repeated this process four or five times until I was able to freeze the half-second that the green blob was onscreen. It looked something like this: 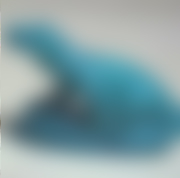 By now, Shannon was fully awake.
“What the hell are you doing?”
“Nothing. Oh my God. Go back to sleep. Holy shit. Do you know what that is?”
“What what is?”
I got up and pointed to the green blob on the screen. “I think it’s one of those wax alligators.”
Sadly, I lack the words to describe the look on her face.
For the record, this is what I saw through the blur: 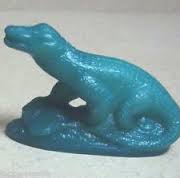 For many people who grew up in the Chicagoland area, there should be a flash of recognition. Especially if they, like me, were treated to any family or school field trips to the nearby Brookfield Zoo. I loved the real animals, of course, but what I looked forward to most were the wax ones. Stationed at the entrances and exits of the various animal houses were Mold-a-Rama machines—bubble-topped contraptions about the size of a hefty jukebox, where, for fifty cents, you could partake in injection-mold magic. After receiving your quarters, the machine rumbled into action. Two long pistons—each holding half of a metal block (the mold) with hoses sprouting off the top—pushed slowly together. Hums and clicks and hisses sounded as fluids and air were pumped into and out of that mold. A light on top of the machine changed colors to signal the different stages of manufacture. Then, a little over a minute later, the mold halves separated, and there stood the red giraffe or black panther or green alligator. A little blade on a long, thin arm would slide from the back of the machine and knock the animal off the sloped metal surface, sending it tumbling into the chute at the front of the machine. You then opened the little door in front, scooped it out, and—holding it by the base—waved it gently for a minute or so until it cooled completely. I learned this last step the hard way when I grabbed a rhino with too much enthusiasm and put my thumb through his chest.
You can watch the process HERE, but it’s missing two key features of the experience: the smell of melting crayons, and the sheer joy of retrieving your prize.
I write this description in the past tense, but that’s not completely accurate. We live in a wonderful time where the collected wisdom and knowledge of the ages exist—quite literally—at our fingertips, so for the twenty minutes following my alligator sighting, I kept Mindy on pause while I Googled away and discovered several things, but for the sake of brevity I’ll stick to the highlights:

In fact, if you type “moldarama animals” into Google Images, you get a pretty good look at the animals that come out of the machines and those machines themselves. Really, you should do that right now. I’ll wait.

Pretty cool, right? Just in case you impatiently charged ahead in this post, here’s some of what you missed: 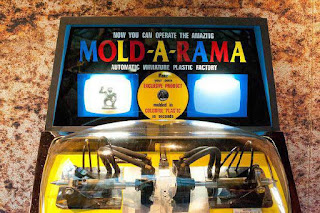 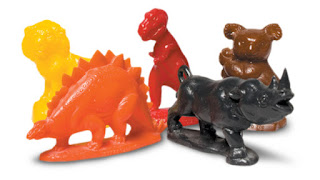 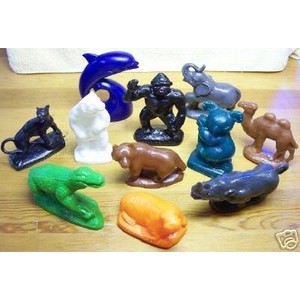 What the images don’t tell is the larger story, which also exists on the internet HERE, HERE, and HERE (to list just a few).  And because it’s very likely that you’re one of those readers who won’t pause to Google mid-read, I’ll summarize.
Mold-a-Rama was founded in the early 1960s in Chicago (and debuted at the 1964 World’s Fair), and today it’s owned by a family business that’s run out of a house in Brookfield, Illinois. The owner—Bill Jones—and his two sons—Bill Jr. and Paul—are charged with maintaining these machines, the most-recently built of which dates back to 1964. It’s their dedication that keeps this little piece of the past alive.
After I delivered this last news to Shannon, she paused before she spoke.
“Can we please watch the rest of the show now?”

My obsession might have ended there, but a couple of weeks later I happened to be visiting Chicago and I found myself killing time in the suburb of Downers Grove, where I grew up. I wandered into the library and was greeted by the sight of glass display cases where local kids had put their collections on display. There was a toy car collection, a Pez dispenser collection, a doll collection, and then this one, belonging to a “Teddy N”: 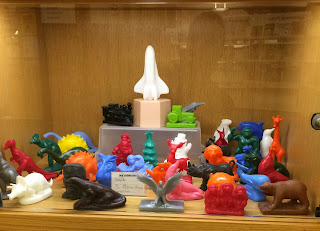 I don’t have any Mold-a-Rama animals any more, but even at its height, my collection would have paled in comparison to his. In mine, animals were always in some state of injury—the panther's tail missing, the gorilla’s hand snapped off, the elephant’s base cracked. And it wasn’t nearly as comprehensive; I’m embarrassed to say that I had no vehicles and not even a single dinosaur (somehow, I was in my twenties before I ever visited the Field Museum). And I certainly didn’t have (but would have fiercely coveted) this boss Komodo Dragon: 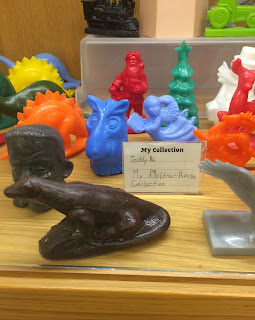 I don’t know anything about Teddy N. other than his name (though, based on his writing, I can ballpark his age), but I have a feeling that we would be great friends, he and I.
Needless to say, I immediately texted pictures of Teddy N.’s collection to Shannon with the words “SEE?!!” I felt vindicated.
Alas, the feeling was short-lived. She texted back a blunt, withering question: “Why can’t you be interested in normal things?”
She’s referring, of course, to my obsession with “junk” (her word, not mine) from the past—comic books, record albums, sports cards, monster/superhero models. In what has become an ongoing haranguing conversation, she suggests that I just get rid of the stuff.
At these moments, I could use a friend like Teddy N. But I have to do without him and explain that these things aren’t junk; they’re valuable artifacts of the past. My past. Because, really, so much of my past—like anyone’s—is either going or already gone. Those collections are a way to hold on to something. That’s why I’ve bought back issues of some of the comics I had as a kid (but that my mom threw out)—especially old issues of The Incredible Hulk, and why I’ve bought and builtmodels I had as a kid, and why Shannon has caught me more than once spending the better part of an afternoon watching 1970s TV themes on Youtube.
I don’t imagine that Teddy N. is reading this, but if he is, I hope that he listens to what I have to tell him. Keep that collection safe. As you grow up, move it from place to place with you, and don’t ever rent an apartment or buy a house without making sure that there’s room for it somewhere. If it’s important enough to you now to let the good folks at the Downers Grove Public Library put it on display, then it’s going to be important to you later on. Trust me on this.
But something tells me that Teddy N. is the kind of kid that knows this already.