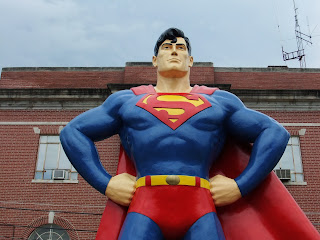 In a week’s time, another comic-book-turned-movie will hit screens and create a storm of midnight showings, long lines, and box office tallies that—whether they come in above or below expectations—will still drop faster than a speeding bullet over the ensuing weekends.

I’m talking, of course, about Man of Steel, the latest reboot of the quintessential comic book character and the one that most people see as the face of the entire medium.

I have to admit that I was never much of a Superman fan. In most writers’ hands, he’s uninteresting, a little too straight-laced and perfect. Yes, there’s Kryptonite, but that’s a plot device, and not a very artful one at that. It has nothing to do with human flaws or frailty—the kinds of things that make superheroes recognizable to their audience. For my money, the best Superman stories have tried to complicate him and get under his impregnable exterior. Stories by Alan Moore (“For the Man Who Has Everything” and Whatever Happened to the Man of Tomorrow), Jeph Loeb and Tim Sale (A Superman for All Seasons), and Grant Morrison (All Star Superman and his run on JLA) are like gold nuggets. And they’re just as rare.

Speaking of gold, there’s plenty to be mined in this new version of Superman. In the last several weeks he’s been everywhere, providing more power than a speeding locomotive to marketing campaigns for the Army, for Dodge Ram trucks, and for Carl’s Jr. cheeseburgers, to name a few. This is Superman as brand, not character, and everyone is trying to cash in; Man of Steel has reached new heights (or lows, depending on yourpoint of view) in product placement spots.

But I’m not here to criticize the moneymaking practices of Hollywood. The Superman juggernaut, coupled with the fact that I’m now off for the summer, has made me nostalgic. So I headed to the long boxes in my spare room’s closet. That’s where I keep the majority of my comics collection. The word “collection” implies value, and there’s plenty of that, but not in monetary terms. It’s more about memories. And by this measure, the value of one title exceeds all others.

I loved monsters at the time, and part of my fascination with the Hulk was that it wasn’t really clear whether he was a monster or a hero. A little of both, really. What was more clear was that he was misunderstood and nobody would leave him alone. I’d read these comics and find myself feeling sorry for him the same way I felt sorry for some other monsters I’d seen on television in movies like Bride of Frankenstein and Creature from the Black Lagoon.

I liked that the Hulk’s enemies were monsters, too. No other superhero had as grotesque a rogues’ gallery; notable members included the Leader, the Gremlin, the Abomination, and—my personal favorites—the Toad Men. I may have liked these guys best because there was a big field behind our townhouse, and I was always catching the toads that fell into our window wells.

What I understood viscerally as a kid and more intellectually now is the power of visual narrative. I’d devour these comics without paying much attention to the writers or artists, but now I know that a big part of the Hulk’s spell over me was due to talented pencillers like Sal Buscema and the great Herb Trimpe.

Some of their images are indelibly printed on my brain. The original Hulk comics I owned as a kid are long gone, thrown out by my mom one day when I was at school. In recent years, though, I’ve replaced some of these with help from online dealers like Mile High Comics and MyComicShop.com, from the back issues sections of nearly every comic book store I’ve been in, and from the myriad booths at Comic-Con every year. Whenever I find one, its cover or some drawing inside appears to me like a vision from a dream that I woke from hours earlier. There’s a flash of recognition, of remembering something vivid, and my waking life pauses. For me, it’s not just the image that stops me, but all of those memories that the image comes wrapped in.

Here are a few that stand out: 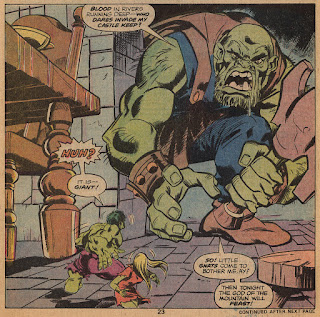 One look at this panel takes me back to a motel room in Clarion, Pennsylvania, where we’d stay every summer on our way to New York. My dad and brother were watching a baseball game on TV, and I was pouring over The Incredible Hulk #202, which I’d stashed in my suitcase for the trip. After Hulk smashes the giant—who turns out to be a giant robot—he’s blasted in the chest with a laser wielded by a one-eyed insect man named Psyklop. To be continued next issue. The problem was, I didn’t have the next issue. I would be well into my thirties by the time I finally tracked that down #203 to find out what happened. (Spoiler alert: Hulk smashes Psyklop and his minions, too). 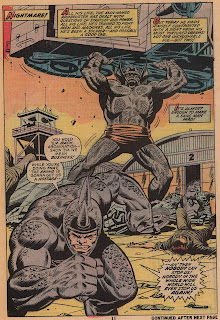 This one is from The Incredible Hulk #171, “The Hulk at Bay.” In the 70s, Marvel released some comic book and record combinations, and I had this one. My brother and I had a little portable record player, and I remember listening and reading along as I waited the whole time for this full page spread, which terrified me as a kid. Two monsters—the Abomination and the Rhino—aiming the full force of their fabulous fury (how’s that for alliteration, Smilin’ Stan Lee?) right at me. 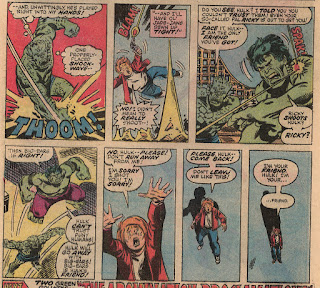 This sequence is from another Abomination issue, “Warfare in Wonderland.” In it, Hulk crosses paths with a young runaway named Ricky and thinks that at last he’s found a friend he can trust. And he has, except that asshat Abomination tricks him. My friend Tony Cruz, who lived two doors down from me, was the one who first showed me this comic, and I traded him a big rubber snake and a cap gun for it. 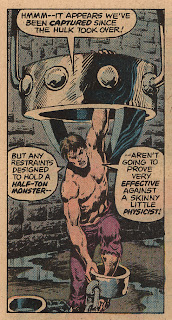 This panel takes me back to New Jersey, where we were visiting my Aunt Ann and Uncle Barry. My uncle listened patiently while I showed him just why the picture was so cool—the bad guy chained up the Hulk, see, but after the Hulk calmed down and turned back into Bruce Banner, he was small enough to climb out. I remember my uncle nodding and smiling, probably not following my breathless explanation or really caring, but definitely happy to spend time with his nephew and Godson. That’s how I like to remember my uncle—looking at a Hulk comic with me, instead of his slow, awful descent into Alzheimer’s. 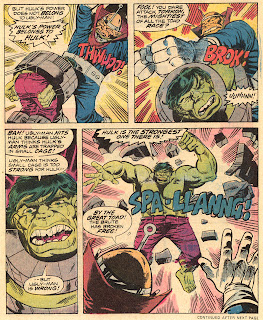 This last sequence is from my favorite issue of all, “Triumph of the Toad.” It’s basically one long fight between Hulk and the Toad Men, led by their king, Torkon. Virtually every panel of this particular comic is etched in my memory; I remember reading and rereading it until it fell apart, replaced years and years later with a little help from a vendor at Comic-Con 2002. These four panels show the genius of Herb Trimpe’s visual storytelling with their varied yet fluid perspectives and angles, and they also embody the essence of the Hulk’s narrative—he’s chased, captured, abused in some way, and then escapes (usually into another crappy situation). I couldn’t get enough of this as a kid.

Or as an adult. Don’t get me wrong; I’ll definitely see Man of Steel, but it will be with the detachment that I bring to most of these comic book movies today. It’s a detachment based on the understanding that these versions of my comic book heroes are spectacles, lighter than the air under a bird or a plane, and not the stuff that childhoods are made of.

Posted by Rocco Versaci at 1:38 PM No comments: