Last week I received a package in the mail—a medium-sized box with the return address of the Illinois Farm Bureau. I knew right away that it was from my buddy Kevin, who’s worked in their educational programs department for a number of years.

Kevin and I were—and are—fraternity brothers; he was a year ahead of me at the University of Illinois, but he joined our house the year after I did. Our house was small, and it followed the general rule of any group: 10% of the people did 90% of the work. Kevin immediately became—and remained—one of the heavy lifters, despite several commitments elsewhere (he was a manager for the Illini basketball team). This hasn’t changed; despite working full-time, serving on the local school board, being heavily involved in his church, and raising three kids, Kevin has also been active in our fraternity on both the local and national level. For him, it’s not about staying busy or being a workaholic. If I were forced to reduce Kevin to a single sentence, I would have to say that of all the people I know, he’s the one who most embodies the spirit of community. He knows that we’re all in this together.

No doubt his upbringing had a lot to do with his attitude. He grew up in downstate Illinois (of course, “downstate” is a relative term; to a suburban kid like me, anything south of I-80 fit this category). It was a small town where people didn’t lock their doors at night and the local high school’s graduating class numbered somewhere from ten to fifteen. I saw all of this myself one year when I had Easter dinner at Kevin’s house. He drove me and another of our brothers around his town (it didn’t take long), pausing at various houses to tell us about the people who lived there.

I have to digress here and tell the most memorable story from that visit, which has nothing to do with Kevin. It’s about his father, who on that weekend happened to be fixing a leaky underground pipe. When he mentioned that he’d found the leak with a divining rod, I smirked in the way that only a know-it-all Chicago suburban wiseass can. He invited me outside to give it a try. The “divining rod” was actually two pieces that looked like sections of a wire hanger bent into “L”s. Kevin’s dad had me hold each one loosely at the bend, the short ends pointing down and the long ends pointing straight ahead. He moved my hands about twelve inches apart and told me to start walking. As INSERT PREFERRED DIETY HERE as my witness, when I came near the area where he’d been digging, the two pieces of metal moved in my hands. Actually moved. The long ends pulled towards each other and crossed, and I jumped, my face registering wide-eyed shock. Kevin’s dad just smiled and said, “Bet they don’t teach that in Chicago.”

No, they didn’t. My knowledge of small-town America came mainly from reruns of The Andy Griffith Show. Until, that is, I went to college, joined a fraternity, and lived with a lot of guys who’d had very different backgrounds than I did. I remember another weekend at another brother’s home way out in western Illinois, when I got to put on boots, slog through snow-covered mud, and help feed some cows.

But back to that package.

I opened the box, and hidden inside a sea of curled styrofoam pieces was a brown envelope, heavy and bulging at one end. Inside the envelope was a five page letter and a baggie full of steel nuts, all different sizes.

The letter explained the bag. Back in October, when I first announced that I had cancer again after ten years, Kevin—having seen my Facebook post and having read my blog—went to his men’s group at his church, and he asked them to pray for me. The group thought about something else they could do. One option was a “prayer blanket,” where the women in the quilting group make a blanket, pray while they make it, and then send it to the person being prayed for. But a few weeks later, after one of the men read my post “Please Lie Still While I Crush Your Balls,” they decided to do something else.

They would pray over nuts.

Kevin gave a nut to each of the twelve men closest to him. All of them carried a nut around in their pockets for a couple of months and prayed for me while it jangled around with keys and loose change. One of the men looped his through a leather cord and wore it around his neck.

When my chemotherapy ended, Kevin gathered the nuts back up and sent them to me. In the letter, he told me a little bit about each of the men (including which fraternity brother each one reminded him of).

I put them on a cable ring, and I’ve been carrying them with me every day in my right pocket. It’s a nice balance to my keys, which I always carry on my left side. It’s also a suitable replacement for what I’m missing on my right. 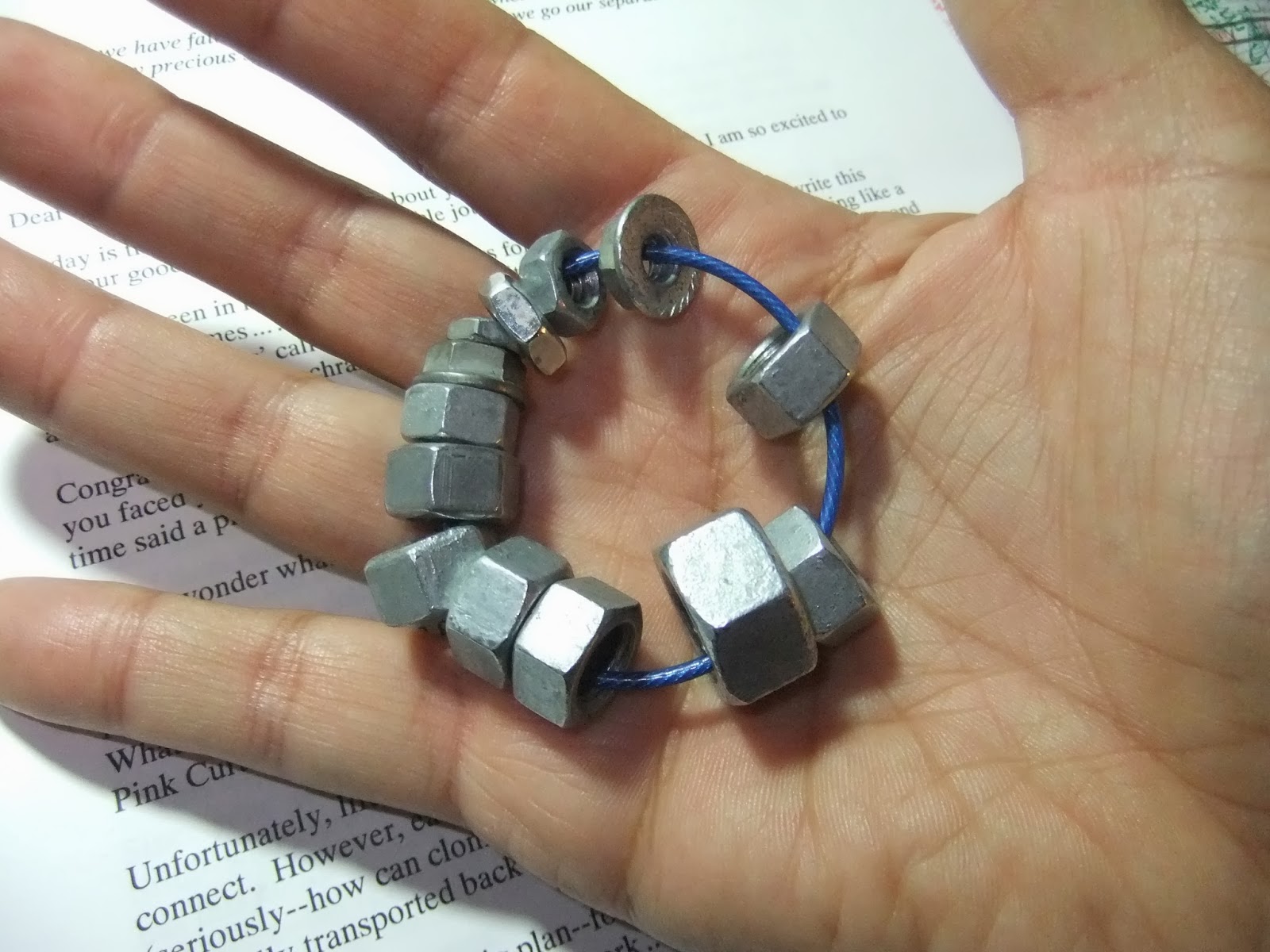 I find myself reaching into my pocket several times over the course of a given day. I like to hold the ring, slip my fingers through it, feel the weight of the nuts. I’m not a big believer in the power of prayer, but I’m a huge believer in the power of friendship and good acts—especially those done by strangers for strangers. It makes this big, scary world a lot smaller and reminds us that we’re part of something. To me, that’s what’s holy.

So I’d like to thank these twelve men, all of whom I hope to meet someday: Rick Lohnes, Tom Payne, Scott Riddle, Bob Sammer, Steve Ward, Harry Jiles, Shawn Benz, Kyle Merkle, Steve Dean, Gary Tipsord, Jeff Baughman, and Parker Daugherty (Kevin’s twelve-year-old son). And I’d like to thank the thirteenth man, my dear friend and brother Kevin. I hope that someday I can do something for someone that means as much to that person as this gift has meant to me.