As I continue to work on the final revisions to That Hidden Road, I'm also thinking about how I'm going to assemble the different narrative pieces. Most of the book consists of long chapters that "cross cut" between my experiences on the road and various memories, but there are also shorter chapters that will pop up from time to time, like the "FAQ" writings that I've posted here.

And then there are the comics. My plan is to sprinkle throughout the book several different comics--a couple of multi-page stories as well as some one-pagers. One group of these one-pagers is a short series called "Stuff I Saw," which I intend to appear a little rough, as if from a sketchbook. I did all of the layout, lettering, and art myself. Most of the images are based on pictures I took, and observant readers may notice two of them that already appear on this blog. Anyway, here's a preview of four of the "Stuff I Saw" comics: 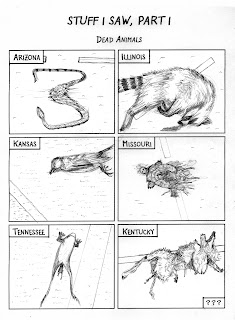 A little gruesome, maybe, but I had to pay some kind of tribute to all of the dead animals that I saw. By the way, coming across roadkill while biking is about a hundred times worse than while driving. First of all, there's the smell. Second, there's the fact that I was moving slowly, so I had plenty of time to take a good, long look. Third, there's not much you can do to avoid it. I tried to move around a dead possum in Missouri and almost got hit by a pickup truck. 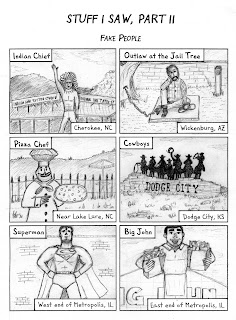 I love roadside kitsch, and to my mind, there's none better than big statues of fake people. My two favorites are on the bottom row, both found in the tiny Illinois town of Metropolis. The best part was that "Big John" is about ten feet taller than Superman. 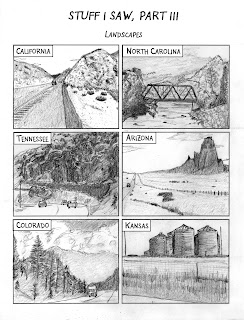 Comics are good at amplifying the quiet moments of life, and I tried to keep that in mind when I sketched these landscapes from various parts of the trip. I'm the least happy with the "Tennessee" panel; all of that dark stuff is supposed to be kudzu, which grows crazy-fast and has taken over thousands and thousands of acreage in the South. 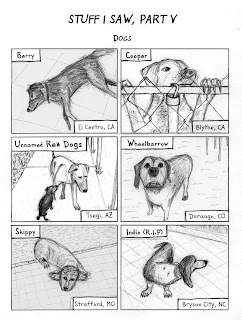 Not every dog was my enemy. I made some canine friends along the way, too, and I wanted to get them into the book in a unique way.

I'm planning to post more of the comics if there's any reader interest, so let me know!