Beaver Bites Man, or, An Eel in the Butt Is Worth Two in the...

Like a lot of people, most of my exposure to news today comes from social media. Someone will tweet a headline or post a video on Facebook, and then I can kiss the next fifteen to sixty (or more) minutes goodbye as I delve into not just the original link but any and all things even slightly related to that topic.
This week, there were two stories that cost me productive morning hours. The first was a story about a Chinese man whose, ahem, “offbeat predilections” resulted in a20-inch eel burrowing into his large intestine. The writer of one story about this incident mentioned that eels like to burrow in “muddy places,” so the introduction of this creature to one’s anus is even less advisable than you might think, if that’s possible. (Fun fact, which I discovered at minute seventeen of my eel exploration: electric eels are not really eels. They’re knifefish).
The second—and more interesting—story this week was about a beaver attack. Someone in my Facebook feed who enjoys wasting time even more than I do (you know who you are!) posted a video about a guy in Belarus who saw a beaver waddling its way down a road and thought, “Hey, what a great video opportunity.” It probably sounded different in Russian. Or Belarusian. Or whatever they speak in Belarus (note to self: Google this later). Anyway, things didn’t work out so well for him. The video is scary; what begins as a cute nature video becomes, in an instant, an outtake from The Blair Witch Project: the beaver charges, and the image goes blurry, then frantic, and finally static as the camera falls. Cut to black.
It maybe goes without saying that after watching it several times, I headed straight to Youtube and searched “beaver attacks.” Turns out, there’s a lesson to be learned. Don’t get close to wild animals.
But the real story is not my penchant to follow trivial and tangential paths through the Internet; in fact, I think I may have covered that in an earlier post. The real story is about truth.
If this story is true, the man died, having bled out when the beaver severed his femoral artery. When I showed the video to a colleague—not with any particular purpose in mind—his immediate response was, “That’s fake.” I asked why, and his only reason was, “C’mon!” We happened to be with some of our creative writing students, so we turned the question to them. After watching the video, they were split. Some laughed, and some cringed. The ensuing debate—if you could call it that, which I wouldn’t—led to two important and paradoxical questions, especially if you’re someone who is working on the craft of writing.
Is everything believable today?
Is anything believable today?
In his excellent book The Art of Fiction, author and teacher John Gardner calls the world the writer creates the “fictive dream.” A writer’s job, therefore, is to invite readers into that dream. It’s a backbreaking chore with not a whole lot of payoff, this business of creating worlds out of words. And I wonder if the job is made harder or easier by our internet culture—have we become more willing to believe the stories that abound out there, or have we become cynical that any of them are true?
I’m not sure what the answer is to this question, even for myself. I know, intellectually, that there’s no such thing as Hogzilla or the Montauk Monster or the Derbyshire Fairy, but part of me wants to believe in them. Wouldn’t that be cool? Who doesn’t want to live in a world with chupacabras or with a horse-sized dog named Hercules? And sure, I believe in science, but I still want to charge my iPhone with an onion.
Exactly where I range on the continuum between absolute gullibility and jaded cynicism varies, but I do know that whether I’m trying to write the fictive (or non-fictive) dream or getting lost in it as a reader, it helps if I want to believe in the world’s possibilities, even if some of those possibilities are downright scary, like beavers who attack or eagles who fly off with children.
I’d love to keep going, but during one of the fifty-seven breaks I’ve taken while writing this, I checked Facebook and read another story that I need to follow up on (right after I find out what language they speak in Belarus). Seems that there’s a guy in Australia with a rare genetic condition. Every part of him has aged normally except for his head. Instead of jumping right to “Aha! Photoshop strikes again!” I find myself wondering what life is like for him. What does he go through each day? What trouble finds him because he has the head of a baby? Can’t there be some kind of truth in all of this? 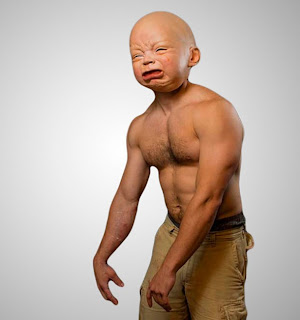 Posted by Rocco Versaci at 2:34 PM No comments: