Keep Your Eye on the Ball 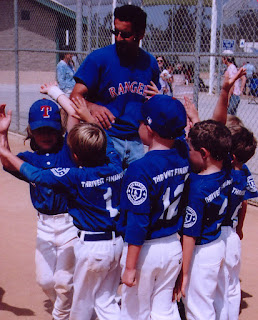 When my boys were younger, I coached their little league teams. Most of the time running practices and managing games were the highlights of my day, but sometimes--sometimes--the experience of working with squirrelly boys was a teeth-grinding exercise in self-restraint.

It's my considered opinion that baseball is the craziest sport to try to teach kids. First of all, there are the rules, which can be mind-boggling for someone new to the sport (How come I have to tag him? Last time I just had to touch the base!). Second, there's the down time, which allows kids to discover all kinds of fun alternatives to paying attention: digging holes in the outfield grass with one's shoe, asking to go to the bathroom four times during the second inning, spitting sunflower seed shells at each other. And third--maybe the biggest problem of all--is that one of baseball's fundamental components is, arguably, the hardest thing to do in all of sports.

The beginning of every season was rough going. Several kids had swings that looked like they were trying to club a bird in flight. Some would spin their whole bodies around when they batted. One kid, James, always closed his eyes as the pitch sailed toward him. He got plunked. A lot.

I felt a little lost. My bag of tricks was limited to what I'd seen of other coaches, so I made my players do the same lame drills like hitting off of a tee or soft toss, and I gave the same lame advice like Throw your hands at the ball! or Keep your eye on the ball! Finally, I decided to do some research on what they did in the big leagues.

What I discovered blew me away. Turns out that there's not a whole lot of difference between how amateurs and professionals get better. The same basic drills, the same basic advice. One of the greatest hitters of my generation--Padres legend Tony Gwynn--once remarked that he always hit wiffle balls off of a tee to improve his swing.

It also turns out that professionals have a tough time hitting. If you're a major league baseball player with a .333 average, then you're a beast, and one who's probably in contention for a batting title. I can't think of any other profession where failing two-thirds of the time constitutes greatness. That's how hard hitting is.

I think about those days that I spent on the dusty, hard-packed infield, my elbow numb from hurling batting practice, whenever I talk to my students about writing. Or rather, whenever I talk to them about why they hate writing. Which they do. Not all of them, of course, but a lot of them. What's most frustrating is that their feelings are based on the misperception that writing is easy. They think that experienced writers churn out words with ease, are always confident, and always get it right.

Writers work hard at what they do. They wade through draft after draft, throw LOTS away, pull out their hair, and are convinced at least twice during any given sentence that the words they're spewing out are steaming turds. A former student of mine who just sold her first book said that she wrote twenty drafts of it prior to publication. Twenty.

My students are convinced that their problems are unique, but for every excuse they come up with, there's an answer:

I suck at grammar.
Honestly, I couldn't have told you what a subordinating conjunction was until I started teaching the stuff. Practicing good grammar is not the same as knowing grammar terms, and it's the latter that students equate (wrongly) with writing. The simple truth is that good writing takes practice, and a big part of that practice is reading. If you read, you'll absorb a lot of grammar. Good writers might not be able to tell you the precise difference between a compound and compound-complex sentence, but they'll know how to vary their sentences to create lively prose.

I can't think of anything to say.
No one can the night before a deadline. There's a reason why baseball players don't walk out of their cars and onto the field at game time. In order to deliver their best, they need to warm up. The same goes for writers. Freewriting, drafting, reading, sharing, and discussing are all things a writer can do to invite ideas. It's true that you can't force inspiration through your door, but you can coax it a little bit and be ready to pounce when it appears.

I procrastinate.
Get in line. I started this blog over a month ago, and by this time I'd planned to have more than three posts. Next to my laptop is a legal pad with a list of things I intend to write, but this list is growing way faster than I'm able to make myself work. The problem is that it's easy to waste time. I can't tell you how often my fingers will be poised over the keys when my mind suddenly asks, What's the difference  between gelato and ice cream? or Have you ever seen any cool videos of leopard seals? or Who have the last thirty number one NBA draft picks been?

I ramble too much.
Hoo boy, here we go. An early draft of this particular post was a shapeless, meandering, overlong version of the paragraph above. The plan was to describe my problems with procrastination by detailing how easily distracted I am with the internet, but it got out of hand fast, rambling on for pages about my obsession with fantasy football, how much I love lists, a half-baked analysis of the impact Len Bias and Hank Gathers might have had on the NBA, and something about missile silos in Kansas. Any point I was trying to make got drowned out by all the noise, so I scrapped it. Still, though, it was good to write. It helped me find what I really wanted to say.

It's tempting to think that the books we read tumble effortlessly out of an author's imagination, but it just ain't so. Another thing that just ain't so is that Miguel Cabrera woke up one day with a perfect swing. That swing, which just won him the first Triple Crown awarded in my lifetime, took a lot of work, and it still misses the ball's sweet spot more than it connects.

The trick is to not give up. Take James, my player who closed his eyes. He'd convinced himself that hitting a ball was something he couldn't do, so why bother to watch? But then a funny thing happened. In a late-season game against the Diamondbacks--a team that had run up the score on us the first time we played (their manager was a total douche)--I told him that he kept getting plunked because he closed his eyes. Apparently he'd had enough welts and bruises, so James kept his eyes open and cracked a real beauty that sailed over the manager's kid's glove, went into the gap for a double, and sparked a nine-run inning that avenged our earlier humiliation.

Letting ourselves believe that a vast universe exists between superstars and us mere mortals keeps us from putting in the work that needs to be done if we're going to get anywhere. If my writing students could have seen James's big-league smile that day, they'd quit their grumbling and hit those keys.