The Sound of One Hand Typing 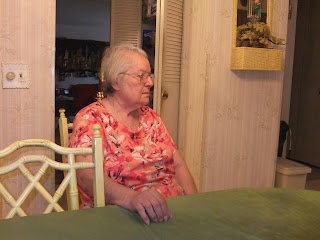 I was in writing lab the other day, trying to answer my students' questions about their graded papers, which I'd just handed back. These questions were fairly typical: "What should I do in my introduction?" "What do you mean by 'more details'?" "What's this word you wrote here?"

Eventually, they hunched over their keyboards and got to work on their revisions. While they wrote, I tuned in to the sounds of the room. Shuffling papers. Mumbled conversation. The drone of the air conditioning. A static-y hum from the overhead projector. And the soft, steady taps of fingers on plastic keys.

This last sound dominated the others, but even so, it was muted, and that bothered me. Like what was being written lacked energy. Well, I knew that was the case for the most part; I had, after all, spent most of my weekend writing things like "vague" two hundred and fifteen times on their papers. But there was something else bothering me. Something about the way things change.

It's been a long time since I heard an old typewriter. It's a beautiful sound. Lots of sounds, really. The clackclackclackclack of your fingers on the keys, the pinnng! as you approach the end of a line, the whirrrr as you slap the carriage back to the right, and the satisfying thock as it locks into position, ready for action again. When you wrote on a typewriter, you cracked through the silence of whatever room you were in and made the kind of racket befitting the struggle of what writing is--wrestling thoughts into words.

Her work was writing letters. She was the one who kept tabs on our sizable Italian family. Aunts and sisters and nieces and nephews and cousins and cousins' kids emanated like spokes on a hub where the hub was Brooklyn and most of the spokes led to New York's other four boroughs. Some spokes reached further. Jersey, Florida, California, and Chicago, where we lived. My mom was the one who knew that Uncle Vito's son Vincent had just bought a house in Yonkers, or that Antoinette and Jerry's girl Martha was engaged to a "very nice guy with a good job," and that her cousin Tony wasn't talking to his son because he and his Irish wife didn't name their first son after him, as was the custom.

As my dad watched the news or a ballgame in the other room and I agonized over story problems in the kitchen, my mom would lug what looked like a giant tan suitcase down from upstairs, set it across from me, flip open the top, and reveal the old Royal typewriter inside. Then she'd pull out the small stack of letters she planned to answer that night, roll a sheet of paper onto the carriage, and start in. My mom didn't know QWERTY, but she had some system of her own that let her hammer steadily away at the keys, stopping only every so often to unjam two typebars that had the nerve to clunk together.

The noise of that typewriter perfectly suited my mom. She's a woman who, for most of her life, would have been affectionately described by the people close to her as loud. When she wasn't writing letters, she kept everybody entertained as her quips and comments tumbled out in a thick Brooklyn accent. And sometimes they had a little edge to them.

Once, years ago, a neighbor complained to my mom that her kids went through twenty rolls of toilet paper in one week. "Twenty rolls!" the woman had shouted in a nasal twang. After that point, whenever my mom referred to this poor lady, it was never by her real name (which I can't even remember). Instead, she had become "Twenty Rolls."

When I was in graduate school, my dad had to have bladder surgery. I drove up from Indiana to help out for a few days, and on the morning of the operation, I drove them to the hospital. Before we left, my mom and I were sitting in my car, waiting for my dad. He was walking slowly around his Sable, looking at the tires, checking the doors, running his hand over the hood. My mom nudged me with her elbow and deadpanned, "Your father's saying goodbye to his car."

But all of that's changed now.

In early 2009 it became clear that my mom was suffering from dementia, and her decline since then has been slow but steady. Once possessed of a formidable long-term memory, she could remember who wore what to some wedding forty years earlier, and she could recite verbatim what people were whispering about it. Now, while she still recognizes immediate family, she'll arrive at family gatherings, ask the same two or three questions, then sit quietly until she's ready for my dad to take her home. Conversations are impossible. Since she's in Chicago and I'm in California, our main connection is a phone call every week or two, and that call is dictated by a tight script that fills about thirty seconds before she has to hand the phone off to my dad. Even less if I ask too many questions that require more than a yes or no.

As my students typed stories from their lives, it occurred to me that our lives are stories, and while we'd like to believe that we're writing them, the truth is that sometimes they're written for us and don't always end with a satisfying resolution. My mom's story is one of those, slowing and fading as if it's being typed with one hand on a soundless keyboard.
Posted by Rocco Versaci at 6:36 PM