In southeastern Arizona there’s a little town called Quartzsite. It wasn’t much more than a blip on my map, but it looked like the only spot of civilization for miles around. Pedaling onto the main drag, I saw a big banner that proclaimed, “Home of the WORLD FAMOUS MAIN EVENT,” and that’s it. I assumed that the seemingly endless rows of stands selling a colorful assortment of crap—signs, rocks, pottery, t-shirts—were said main event. I appreciated how obvious it all was. It was only my fifth day out, but that time had  stretched into one long lesson about how badly I could misjudge things--distances, the heat and wind, my energy, and most of all, how exposed I would feel alone on my bike.
My destination for the night was Salome, which was still about thirty-five miles down the road. In Jack Kerouac’s On the Road, he mentions taking a bus from Blythe (where I’d slept behind a bait shop the night before) to Salome, and I tried to recall the line but couldn’t. As I headed out of Quartzsite, something happened that seemed to defy mere coincidence. I spotted a used bookstore that was open even though it was Sunday.
The store, Reader’s Oasis, sat at the end of a long, gravel parking lot, and the building itself had a western-y feel to it. Wooden front porch and rail that, if it were one hundred years earlier, I might have used to hitch up my horse. As it was, I leaned my bike up against it. And as I did so, I glanced into the store and did a quick double-take.
A naked man stood in the doorway.
Well, almost naked. I was looking at him from behind. His body was rail-thin and resembled an old baseball glove left out in the sun too long. A cowboy hat sat atop long gray hair. Down below, the tiniest hint of string circled his waist and disappeared into his butt crack. He was talking to a guy wearing glasses, a collared shirt, and khakis, and I assumed that I was looking at some crazy customer talking to the store’s owner. I was more or less right.
I could hear one of them speaking: “…I live a celibate lifestyle, but I still like to look at sex books. Do you have any sex books?”
It was the guy in khakis.
“Well, I can show you what I have,” the naked man said, and the two walked to the back of the store.
After a few minutes the naked man returned, smiling.
“You look like you’re on quite a journey.”
“Uh, yeah,” I answered, trying hard not to think about the little crocheted sack that was holding his junk. “San Diego to North Carolina.”
“Isn’t that something?” he said. “Mind if I take a gander at your rig?”
It took me a second to realize that he was talking about my bike.
He inspected it closely, asking me questions about the ride, the panniers, what I packed, and how the trip had been so far. Somehow, as we talked, I completely forgot that I was talking with a naked man and we were not standing in a locker room.
“I’ve got a Trek myself,” he said, pointing with his thumb to some vague spot behind him. “Once a year, the wife drives down to Yuma to do some shopping. I’ll bike down there and catch a ride back with her. Yuma’s nearly all downhill from here.”
I felt a question forming on the edge of my mind, but then the celibate guy came back to the front of the store. In both hands was a stack of reading material that I assumed were sex books. If I didn’t already know better, I would have sworn he was some preppy grad student getting ready to write a research paper. The naked man left my side, and I took a look at the numerous flyers that hung outside the front door. One was bright yellow and read, PUBLIC NOTICE—STORE-OWNER WEARS ONLY A “THONG”…IN OTHER WORDS, NUDIST ON PREMISES.
The naked man returned to talk to me, now his only customer. He told me his name was Paul Winer, and he’d been in Quartzsite for almost twenty years. In addition to being a nudist and running a used bookstore—a pretty good one, I’d decided after poking around—he was also a musician who used to perform under the name “Sweet Pie” and a cartoonist who still drew for the local papers.
“I’m the second most Googled thing in Quartzsite,” he told me.
“What’s first?” I asked, hoping that our understanding of the word “google” was the same.
“The big gem show every year.”
I was about to take off when I remembered the reason that I stopped in the first place.
“Ah, Kerouac,” he said. “I haven’t seen a copy since last December.”
As I maneuvered my bike back up the gravel to the main road, Paul shouted after me, “Keep your eyes open!”
I pedaled back onto the highway and continued east, already shaping the encounter into an amusing little story to help me on the uphills I was surely heading toward. I was trying to figure out the ending—some way to work the sex book guy back into it—when the question that almost came to me earlier returned, fully formed. It was so sudden and so obvious that I actually shouted into the sandy, rock-strewn hills all around me.
“SHIT!”
I should have asked him if he bikes to Yuma naked. 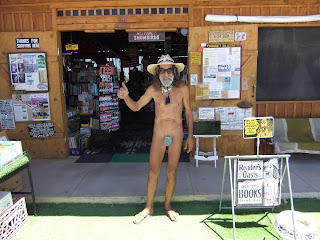