I always feel a kind of heaviness at the end of the fall semester. Every year as it winds down, and as my students work diligently (I hope) on their final papers, projects, and revisions, I can't ignore the fact that it's the end of another year as well. With its shorter days and chillier air, December provokes sobering reflection on the previous months, and--like usual--I have very mixed feelings about this particular year. On the one hand, it brought some incredible joy--the publication of my second book, That Hidden Road, for one, and the all-but-improbable World Series win of my beloved Chicago Cubs, for another. Yet there has also been the bleak political landscape and all the mess stemming from what has been--in my opinion--the most chaotic and meanest Presidential election of my lifetime.

For these reasons, 2016 stands as a year I'll regard with much more ambivalence than normal. And of course, the New Year is an arbitrary point; the repercussions of the previous year always continue into the next. But right now, the fear and uncertainty is way too big to take on, so I'll concentrate on something a lot more manageable (and self-serving)--some upcoming events early in 2017 where I'll be reading from and/or signing copies of That Hidden Road. Sometimes all we can do is share a little bit of ourselves with other people in the hopes of making a connection, and it's in this spirit that I look ahead to these places where I've been given the opportunity to do so:

On Thursday, January 12, I'll be at Anderson's Bookshop in Downers Grove, Illinois, at 7pm. For more info, click HERE.

On Sunday, February 5, I'll be at Warwick's Books in La Jolla, California, at 12 noon. For more info, click HERE.

On Tuesday, February 14, I'll be the featured author at the "Writers Read" program at the Fallbrook Library in Fallbrook, California, at 6pm. For more info, click HERE.

In addition to their intrinsic rewards, I've always found teaching and writing to be distractions from the sometimes oppressive onslaught of daily life, and I'm certainly hoping that they continue to be in 2017.


Posted by Rocco Versaci at 9:37 AM No comments: 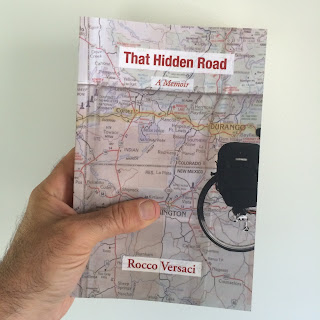