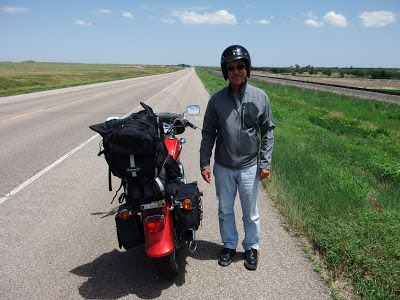 I was eating a stack of pancakes at the Coyote Flats Café, a little place that—together with the gas station a quarter of mile down Highway 60—was the only sign of civilization I’d seen in this desert for the last few hours. The pancakes were perfect. All spongy in the middle and crisp on the edges. They were so good that I didn’t even mind the imitation syrup, no parts of which had originated in any tree of any kind.
The place was empty except for an older couple a few booths away—regulars, I’d gathered, based on the way they tossed names back and forth with the waitress. The only other person there was a barrel-chested guy who’d been lingering by the pool table in back, an unfriendly-looking bulldog panting by his feet. The man stood and wandered behind the counter, where he refilled his coffee cup and squinted through the front window to where my bike was leaning in the shade. He asked me about it and stepped from behind the counter. That’s when I saw the big silver .45 strapped to his hip. Welcome to Arizona.
I forced myself not to stare at the gun as I told him that I was biking across the country, that I had left San Diego about a week earlier and was hoping to get to the Atlantic by the end of next month. When he shrugged and offered his succinct advice, I didn’t contradict him.
What I thought was, Well, yeah, it would be faster by car, douchebag. But speed isn’t really the point.

As I was biking through Monument Valley on Highway 163 less than a week later, a Honda Civic blew by me at about seventy miles per hour. A few minutes after that, coming the other direction, a rusty white pickup truck crossed the double yellow line to pass a slow-moving camper. There wasn’t much of a shoulder to speak of, and both of these vehicles came close enough to push me aside with a blast of hot wind. But I was annoyed less by almost being flattened than by their need to rush. We were in the midst of one of our country’s most picturesque places, the land where John Ford filmed some of the greatest westerns of all time. All around us, ancient fingers of red rock reached into the azure sky, dwarfing those of us just passing through this land of almost spiritual quietude. And then some bozo would roar by, jockeying around a car to get somewhere—where? where?—just a little bit sooner.
I was annoyed at the flash of recognition, too. I’ve been that driver, hurrying to pick up one of my sons at school, hurrying to a meeting, hurrying to a movie, or just hurrying because I was angry at that guy ahead of me who couldn’t seem to find his gas pedal with both feet and a map.
But life goes by fast enough without us shoving it along—an easy thing to do when we’re insulated. In our cars, with the windows up and the radio on, we’re separated from everything with sound and AC and metal and glass. A speedy little bubble on our way from here to there. On a bike, though, there’s no bubble, no real speed. And slowing down does wonders for your perspective. It’s hard to miss things. Even when I was headed downhill or cruising along with a tailwind, I could still see every empty coffee cup and broken bungee cord on the ground. I could get nice long looks at a field of corn or dark rain clouds. I could stop and talk to a woman hanging garage sale signs—like I did in Blythe, California—or ask a farmer about how the tobacco crop was looking this season—like I did in White House, Tennessee.
Of course, life on two wheels is what you make of it. One afternoon, as I was working my way to Dodge City, a motorcycle pulled off to the shoulder up ahead of me. The rider dismounted, stood in back of his cycle, and gave a little wave. When I stopped, I could see that he was smiling.
“Need any water?” he asked.
“I’m good,” I said. “How’s it going?”
He grabbed my hands and gave it a few vigorous pumps. “I’m Ron,” he told me. “Thirty years ago I did the same thing you’re doing.”
He was twenty when he set out from Boulder to New Hampshire on his bicycle. Now fifty, he was retracing his route. He still had his original map, which we somehow managed to look at in the blistering Kansas wind.
He told me that he’d turned twenty-one on that ride. On his birthday, he was in upstate New York, deep in wine country. He wandered into a winery, bought a bottle, and drank it by himself outside of his tent that night.
“I’ll always remember that,” he said.
We talked for a few more minutes, took each other’s picture, and then parted ways, but not before he gave me a hug and told me to travel safe.
I took my time before starting again. Standing next to Rusty, I leaned into a stiff prairie gust—the kind that had been pummeling me all day—and watched Ron’s motorcycle grow smaller in the distance. I turned to remount, and as I did, I noticed two spots of color on the other side of the road. Bikers, both bent low over their handlebars, legs churning furiously. The headwind that had been slapping me in the face gave them a powerful shove from behind.
When they were nearly opposite me, I smiled and raised my arm in a big wave. I hadn’t seen another biker in days.
There was no way they didn’t see me, but they sped on by without so much as a nod.
I’d like to report that they were racers sporting skintight spandex, ultralight bikes, and teardrop-shaped helmets. People out for weekend exercise, focused on the task at hand to the extent that a stop-and-chat was out of the question. But they were just like me. Front and rear panniers filled to bulging. More gear wrapped tight on top of the rear rack. At least three water bottles visible on each bike. Out on the road for a while, no doubt about it. Eyes straight ahead, locked on course, no time to share a few minutes with a fellow traveler.
What’s the hurry, guys?