Scenes from Week One

Well, I made it through my first week of chemo and now have two weeks off to recover before I go back. As the days have passed, I’ve been feeling more and more disjointed, so I thought that instead of imposing a false sense of order on everything, I’d try to mirror how scattered I’ve been feeling.

I receive my treatments in a large room that sits at the back of my oncologist’s office. From above, the room would look like a wide smile. The teeth, in this case, are cushiony recliners where patients sit as they’re infused. 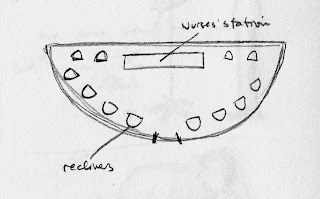 There are many props in that room, but for some reason I fixate on one in particular.

Each day I’m greeted by the nurses and medical techs there—Sue, Heidi, Maria, and Beth—and invited to pick a seat. 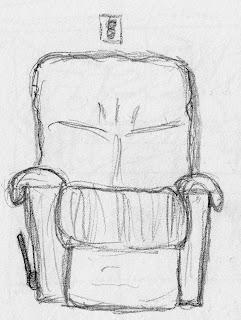 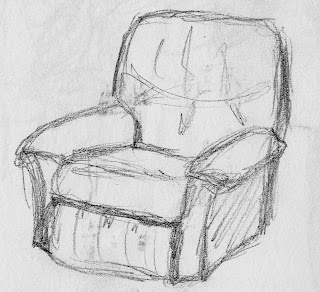 “The 70s on 7”—this week’s preferred XM radio station. One of the nurses—Heidi—has so far known all the words to every song that’s come on. Really good voice, too.

“The Night Chicago Died” on Monday morning. When I was a little kid, my cousin and brother once used this song to make me cry; I can’t remember how, exactly, but apparently it didn’t take much.

Sue, who’s been handling my chemo all this week, is a cancer survivor herself. Like me, she's Italian but doesn't speak the language.

The port is working out well. I didn’t get one last time, and getting stuck with IV needles over and over again in my hands and wrist really took a toll, physically and emotionally. I wasn’t sure what to expect with the port, and just before Sue hooked me up for the first time on Monday, she asked, “Do you want some numbing spray?”
I had no idea that this was even an option.
“Um, YES.”
“Some people don’t like the spray,” Sue said. “It’s a little cold.”
A little cold? In my mind, the choice between “a little cold” and a needle is not much choice at all.
And it wasn’t. The spray was kind of refreshing, and I didn’t feel the needle go in at all.

The nurses have a weekly football pool that I horned my way in on. When I turned in my picks and five bucks on Wednesday, I asked if I could get a handicap since I had cancer. Heidi’s immediate reply: “Nope.”

My infusions last about four hours. I try to keep myself busy. Writing, reading, sketching. I do this last one quickly because it has the potential to unnerve others. Also, it's a convenient excuse for my sloppy drawings. 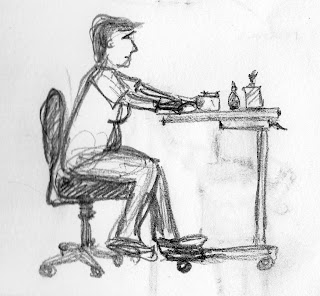 The side effects don’t waste much time.

Tuesday morning, and I’m wide awake at 2:15 a.m. I’m not anxious, or feeling ill; I’m just awake. I get up and write for about an hour. Then I go back to bed.

The next night, the same thing. This time I read. Maria Semple's Where’d You Go, Bernadette?

On Wednesday, a definite drop in appetite. This feeling is manifest in what I see and feel as a little ball of “queasy” lodged just under my sternum. When I imagine eating—or making one of the juices that I’d planned to make each day—the ball throbs a little and my jaw gets tight. Eating anything becomes just about the last thing I want to do.

I perk up a little on Thursday with the anti-nausea meds, but when the weekend rolls around, I’m just not hungry. Perversely, I can’t stop thinking about eating, which makes that little ball of queasy jump around.

I feel like I’m walking more slowly, more carefully. As if waiting for something to happen. I don’t like this.

This line, from a story by Tobias Wolff: “That room—once you enter it, you never really leave.”

That may be true, and it’s maybe also true that when you’re in that room, it’s easy to feel alone. But that’s not always the case.

On Friday, as Sue inserted the needle into my port, Beth rested her hand against the side of my face, and I thought of this.

Different friends from work have sat with me for a little while each day.

Students have sent me messages. Hope you’re feeling well and  I’m enjoying your blog and Is it okay if I turn the homework in a day late?

Calls, emails, texts from friends. Each morning of chemo, a text from an elementary school friend who—before this last summer—I haven’t spoken to since high school.

Cards in the mail when I get home.

A long, cardboard box. Inside, a giant stuffed T-Rex from my crazy cousin (the same one who helped my brother make me cry). She knows how much I love monsters.

Who else is in that room? The world of the unwell has many citizens: 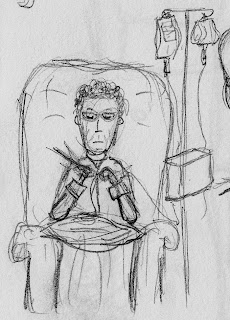 Melinda (not her real name) is a mother of three who has ovarian cancer. She’s younger than I am and sits quietly through her infusions, which take up even more of the mornings than mine do.

Jack (not his real name) is an older guy and veteran who has multiple growths around his esophagus and in his liver. He told me that he’s been “fighting an uphill battle” since April.

Sam (you get the point about the names, right?) is another older guy who speaks barely above a whisper. Not sure what’s wrong with him, but he’s in for about an hour each morning and reads on his iPad.

In that room, age and wisdom don’t always correspond the way you'd think.

I overhead a young woman patient of about thirty (who has clearly been doing this for a while) comforting her seat-neighbor, a woman of about seventy (who was clearly just getting started).

When Sue was getting me hooked up one morning, I said that ten years ago I was the youngest person in the room. Not so much this time around. She told me there were quite a few young regulars, including a nineteen-year-old who, according to her, “probably won’t see twenty-five.” 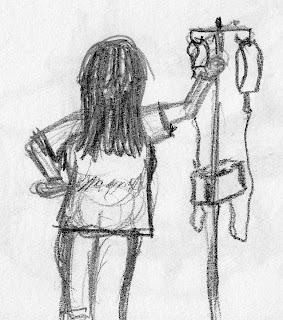 Tomorrow I’m back to teaching. I’m a little nervous about my energy level, but I know that being back among my friends and students is infinitely better than sitting around at home and thinking about being sick, about being back in that room.

Posted by Rocco Versaci at 9:06 AM