Putting the Comics into Comic-Con 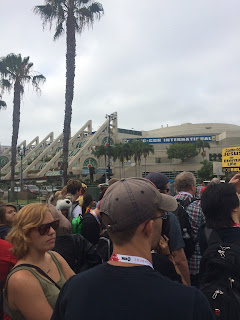 Unless you’re one of the 130,000 or so people who annually attend it, San Diego’s Comic-Con has probably been packaged to you in the media (assuming that you’re even interested in such things) as a four-day bacchanal of superhero movies, television shows, and cosplayers.
And to some extent, it is. I’ve been going to Comic-Con for the last eighteen years (a number dwarfed by many Con-goers, I assure you), and in that time I’ve seen the attendance triple and the convention center undergo a major expansion—none of which was due to a growing interest in comics, per se. It’s been due to the increasing number of movie and television stars, studios, and fans in attendance. Two of the biggest draws this year were for movies that won’t open until 2016 (and if you’re waiting for a plug for them, then this probably isn’t the blog post for you).
While outsiders get a pretty one-dimensional view of Comic-Con, the truth is that the convention is many things to many people (if you’re interested in the range of the “Comic-Con experience”—and the Con’s shift in focus over the years—then you should check out Morgan Spurlock’s 2011 documentary, Comic-Con Episode IV: A Fan’s Hope). To me, Comic-Con is about the comics, though I'll admit that I appreciate a good star-sighting and take copious pictures of the cosplayers. Many people—including insiders—have been sounding the death knell for comics at the Con, but I still saw plenty to command interest. So here’s a rundown of some titles that more people should be reading—titles that scored either awards or panels (or both) at this year’s Comic-Con: 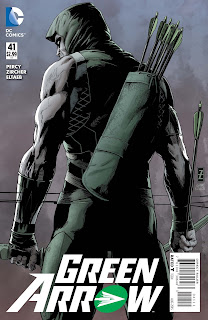 Let’s get the biggies—DC and Marvel—out of the way. First up is Green Arrow. Or, more accurately, Green Arrow #41, which starts a (hopefully long) run by one of my favorite writers, Benjamin Percy.  Known primarily as a novelist (Red Moon, The Deadlands), Percy is bringing his unique sensibility (read: sophisticated horror) to one of DC’s canonical titles. Only two issues into his run, Percy and artist Patrick Zircher have already established a dark, chilling tone to the world of Oliver Queen. 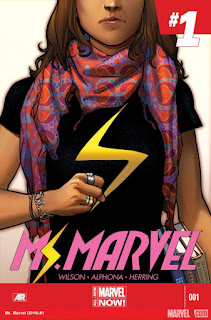 On the Marvel side, I recommend one of the most exciting books out right now, Ms. Marvel. In this iteration, the titular hero’s secret identity is Kamala Khan, a Pakistani-American teenager living in New Jersey (and who happens to be the first Muslim character to command her own title). Writer G. Willow Wilson and (usual) artist Adrian Alphona have created a smart and engaging character here, and they’re using the title to explore not only the complexities of being a teenager, but also the complexities of identity in all its forms, including religious. Two quick asides. First, images of Ms. Marvel were used to protestanti-Muslim ads on San Francisco buses. Second, this cutie: 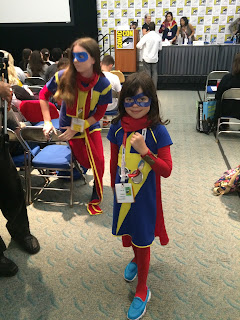 She was the darling of a couple of panels I attended at Comic-Con, including the packed house at “The Women of Marvel.” 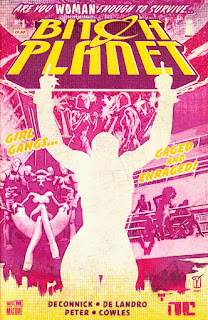 While we’re on the subject of women in comics, there’s Image Comics’ Bitch Planet. Written by Kelly SueDeConnick and drawn by Valentine DeLandro, this comic is an in-your-face feminist reclamation of the “women in prison” genre, and it gets better with each issue. As an added bonus, DeConnick and DeLandro have a lot of fun with the ads and columns at the end of each book. Definitely a title to watch. 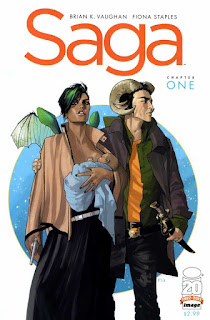 Also from Image—which has firmly established itself as the most interesting of the mainstream publishers—is Saga, from writer Brian K. Vaughan and artist Fiona Staples. I’m not a huge sci-fi/fantasy guy, but this story of on-the-run star-crossed lovers from warring planets (as narrated by their baby) succeeds at hooking both the gut and the brain. I’m sure that somewhere there are adaptation talks going on, and I’m sure that the result will be yet another example of awful CGI bombast. Saga has also won the Eisner for “Best Ongoing Series” three years running. 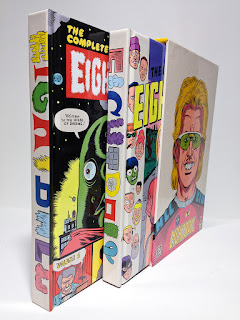 From Fantagraphics this year is the two-volume edition of Dan Clowes’s Eightball. While the book carries a hefty price tag, it’s worth every penny (if you can afford it). These hardbacks come packaged in a slipcase, and they reprint issues one through eighteen of the legendary comic—which, not incidentally, was one of the titles I discovered in graduate school that hooked me on the amazing possibilities of the medium. Clowes is a true master of comics, and this collection of his early work is not to be missed. Also check out David Boring, Ice Haven, and The Death-Ray, which appeared in the pages of Eightball but are not (as Clowes points out in his introductory notes) included in this set. 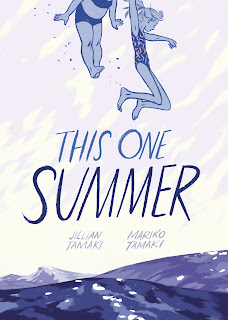 These last two (okay, three) graphic novels are ones that I haven’t yet read but plan to shortly. The first is Mariko and Jillian Tamaki’s This One Summer, a coming-of-age storythat has received both critical acclaim and some undeserved notoriety. I had heard about its excellence before Comic-Con, but it wasn’t until I attended a panel on banned comics put on by the Comic Book Legal Defense Fund (CBDLF) did I find out that This One Summer has been the target of censorship. 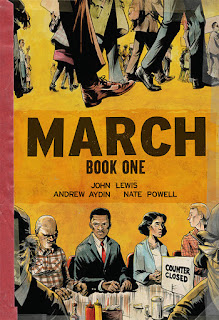 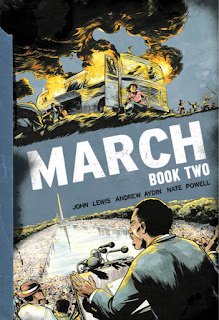 On Saturday morning I attended one of the most stirring panels I’ve ever seen at Comic-Con. The focus was TopShelf’s March trilogy, written by Congressman John Lewis and Andrew Aydin and illustrated by Nate Powell. The books (volumes one and two are currently available; book three comes out next year) cover the life of Lewis and his struggles for civil and human rights. At the panel, Lewis spoke passionately about the importance of nonviolent revolution as a way to combat our society’s inequalities and injustices—a lesson he learned directly from Martin Luther King, Jr. As he spoke of his hope for the younger generation to carry this message forward, I couldn’t help but think of my two sons, both of whom are much more engaged in the issues of the day than I was at their age. At the conclusion of the panel (which was packed), Congressman Lewis asked everyone to walk with him down to the exhibition hall floor, where he and Aydin and Powell signed copies of their book. Here are a few shots: 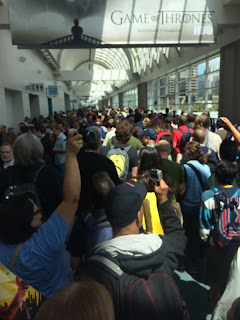 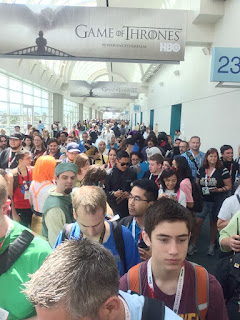 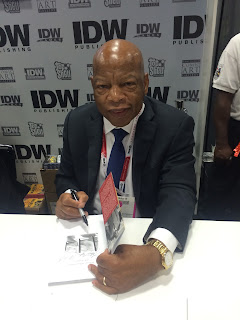 The last thing I want to mention is that many see Comic-Con as a haven for fanboys and fangirls, but there’s actually a thriving academic presence there as well. Aside from the many sessions aimed at (and created by) teachers and librarians, the Comic Arts Conference has been integrated with the programming at Comic-Con for over twenty years and is a place where comics scholars share their work
with other academics and fans alike. One frequent presenter at the Comic Arts Conference (and friend of mine) is Dr. Charles Hatfield, author of Hand of Fire and professor at California State University, Northridge (CSUN). At Sunday morning’s annual “Tribute to Jack Kirby” panel, Charles announced that he’ll be curating “Comic Book Apocalypse: The Graphic World of Jack Kirby,” anexhibit of 100 original pieces by Jack Kirby that will appear at the CSUN artgallery from August 24th to October 10th. If you’re anywhere in the Los Angeles area, you should check it out.


So that’s it from this year’s Comic-Con. The city of San Diego recently completed a deal to keep the convention at least through 2018 (at the likely expense of the Chargers, no less). I don’t know what the future holds, but if the comics rewards are as rich as they were this year, I’ll continue to set aside whatever five summer days this particular circus comes to town.

Posted by Rocco Versaci at 6:29 PM