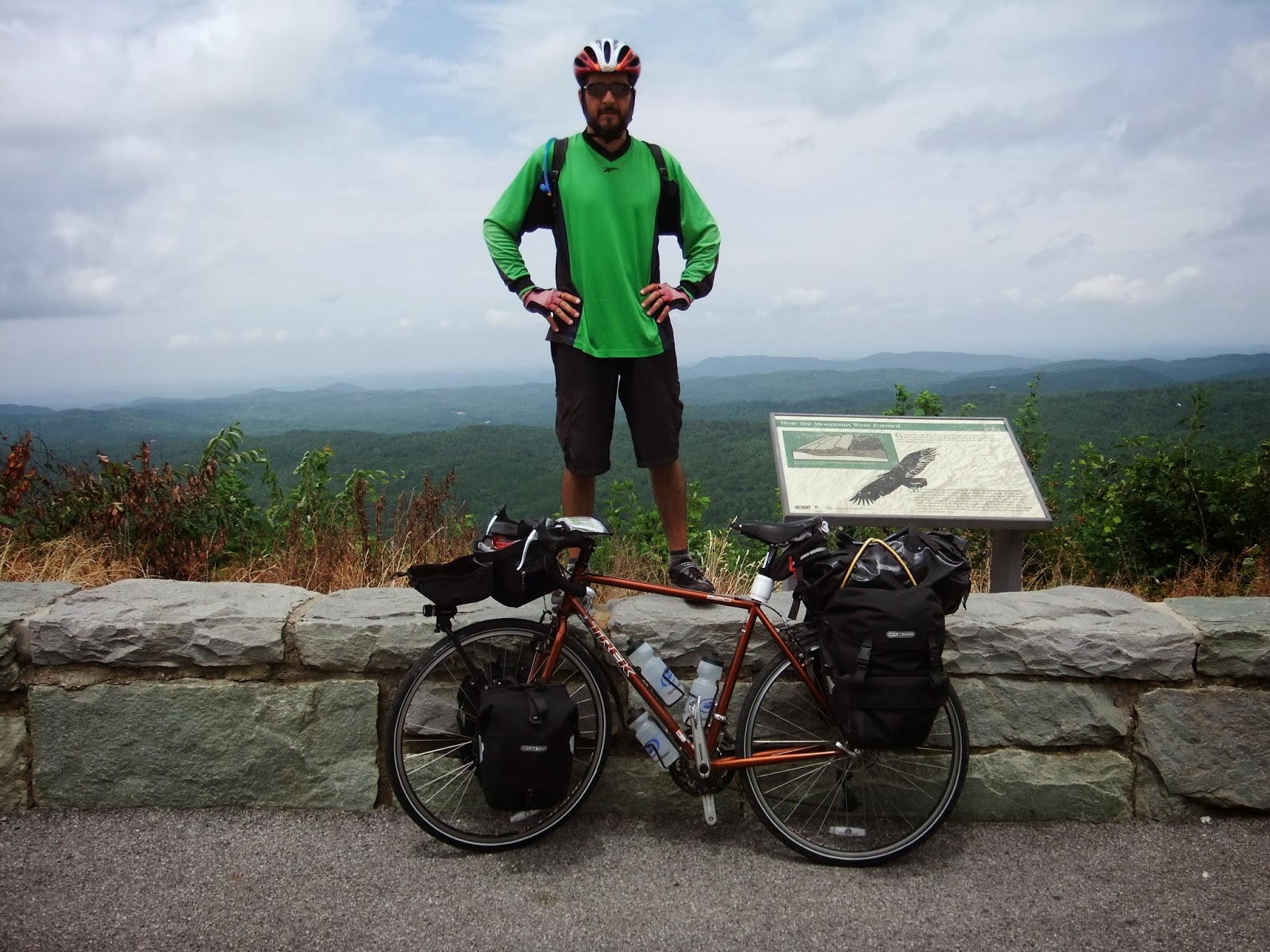 When I biked across the country, my single worst day came pretty late in the trip. I was crossing from Tennessee into North Carolina on Highway 165, which is known around those parts as the Cherohala Skyway. My new friend Lawson—whom I’d met about a week earlier in Clarksville, Tennessee—told me that it was beautiful country.

And it was. Or I guess it was. It was kind of hard to pay attention because soon after I started out on it, I was climbing.

Obviously, at that point of my journey, I had done my share of climbing with a loaded touring bike. I’d already made it through the Lagunas in southern California, the Rockies in Colorado, and the Ozarks in southern Missouri. But the Appalacians—the mountain range I was crossing here—presented a different problem. Even though they’re not nearly as high as the Rockies, the roads are cut into them much differently—steeper and more winding.

I also had no real idea where I was. My phone read NO SERVICE almost as soon as I started up, and on my map, the road was little more than a squiggle through a big green field. No markers, nothing.

And then there were the motorcycles. Hoards of them passed me in both directions all day long, their motors chopping the air in rising fits until they’d appear either in front or behind me. I came to hate that noise, those thick tires, all that shiny chrome. I came to hate their riders, too, with those ZZ Top beards, leather vests, and thick, hairy forearms.

Okay, I didn’t hate them all. The ones who threw me a peace sign or a thumbs-up or a few quick taps on the horn as they passed, they were all right. But the others had to go. And so did their engines, which did all the work for them.

But the worst part about that day were all of the false peaks. I climbed for six hours, twisting and turning up and up, telling myself as I rounded a bend—panting, sweating, ready to fall over—that this had to be the last one, this had to be the top, the road had to level off here and start to drop.

But no. Each time I would curl around a wall of rock and trees only to find that I was still going up.

This day came back to me two weeks ago, when I met with a surgeon to go over my latest scans. After my fourth and final round of chemo, my doctor scheduled a PET/CT scan. The PET part of things checks for cancerous activity, while the CT would provide a picture of the tumor sites to see how they compared with the scan I had back in October, at the start of it all.

The PET was clear. No real surprise there; my blood had been free of tumor markers since the second round of chemo. The CT, however, was a different story. Not much change from before. The specialists involved—my oncologist, my urologist, and my surgeon—were in accord on two points. First, that the tumors were more than likely benign, and second, that they had to come out. Surgery. A big one, as it turns out.

The procedure is called a retroperitoneal lymph node dissection, or RPLND for short, and I’d been putting it far out of my mind since my initial forays onto the internet back in October. It’s an invasive, complicated, and, yes, risky procedure given the proximity of the tumors to a few important innards, like my aorta.

As my surgeon ran through the finer points—six hours on the table, maybe close to a week in the hospital, a couple of other details that didn’t make it through the blood pounding in my ears—I kept thinking about that road that climbed forever. I felt like I was on it again. Just when I think I’ve crested, just when I think I can start to cruise a little bit, I turn the corner to find another false peak, that there’s still some climbing to do.

It started to feel like too much for me.

And then I remembered how that day on the Cherohala Skyway finished up. 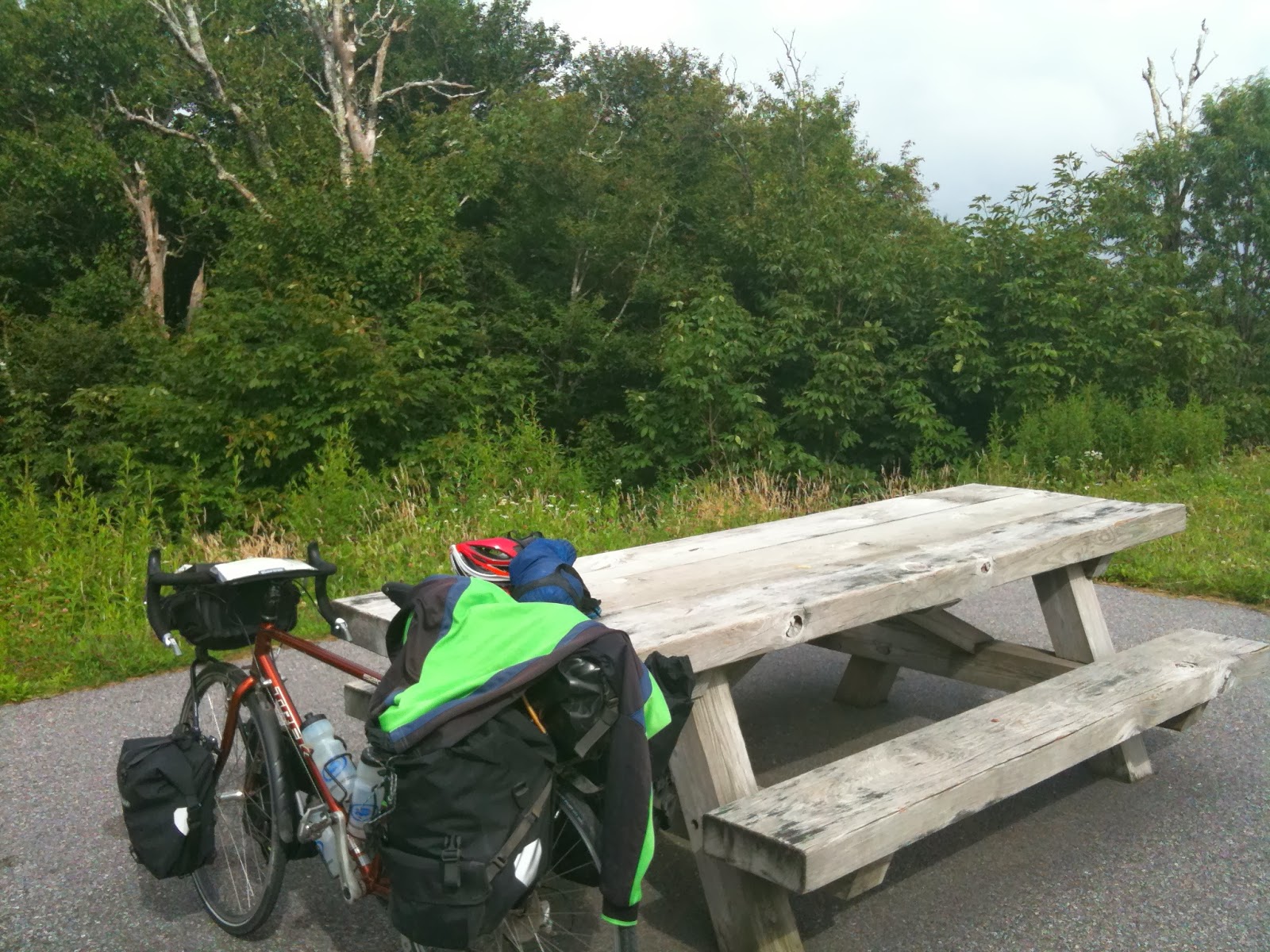 Things came to a head late in the day. I was on hour six of the climb when I saw a little grassy area with a picnic table off to the left. That was it for me. I’d had enough and pulled over to camp for the night.

I leaned my bike against the picnic table and changed out of my soaking jersey. Feeling a  little better, I unhitched the bag containing my tent and sleeping pad from the rear rack and let it drop to the concrete pad with what I thought would be a definitive thump, but it caught the edge of the table and rolled onto the soft grass with hardly a sound. The only place to pitch my tent was on a narrow gash of lawn that almost immediately became forest. A quick rummaging through my handlebar bag revealed the contents of my larder: a few almonds, dried blueberries, and a pouch of tuna.

It was overcast and cool as the day headed into dusk. A blanket of trees defined the contours of the rolling mountains, and pockets of mist were starting to form in some of the indentations. These were the same woods that lay just beyond the picnic table; I could walk into them and within ten feet the road, these tables, and my bike would all disappear. In a few hours the forest would come alive, its inhabitants looking for food.

I remembered reading that bears could smell food up to eleven miles away.

The road had been empty for a while. Did the police patrol it at all? Maybe a state trooper would rouse me from my tent in the middle of the night. Better that, I figured, than a bear looking for my nuts and berries and tuna.

My phone still read NO SERVICE. If something were to happen, I had no way to call for help. And under a thick blanket of night, even with my lights, escape might be more dangerous than staying put.

At that point in my trip, I should have been more immune to the indecision of the road than I was. I walked to the edge of the grass trying to make something materialize in the forest, some clue that would tell me if I’d be safe that night, but there was nothing.

I picked up my bag, not sure what to do.

I’ve got to get out of here.

It was six-thirty. With rows of mountains behind me, the sun was already invisible, and its remaining light was being swallowed by the long shadows spilling from the forest. In another forty-five minutes or so, those shadows would roll right over me.

I decided to go for it.

And what did I find? The summit of those Goddamn mountains that I’d been climbing all Goddamn day was slyly waiting for me barely a half mile up the road. As I crested the top, I took a deep breath before hurtling down—beating the bears, beating the dark, beating my own bonked out, noodle-like legs—to a little town called Robbinsville.

So I’m hoping that this surgery on the 17th isn’t another false peak, that there won’t be any complications, that I won’t have to go through another round of “insurance” chemo. I’m ready for this road that I’ve been on since last October to start to level off.

But if it doesn’t just yet, I know what I’m supposed to do. Keep pedaling.