Nice Shootin', Tex! or, Crossing Off #18 on the Bucket List

When I was a kid growing up in the 70s, a bunch of us in the neighborhood used to play a game we called "Guns." Not very imaginative, but neither was the game, really. We sorted ourselves into teams, and everybody picked someone to "be" from TV. Tony Cruz, who lived two doors down from me, was Baretta; Scott Reed, my next door neighbor, was Hutch; his sister Debbie, the only girl who played, was Pepper Anderson (from Police Woman); and Steve Kafka, who lived on the other side of the townhouse unit from me, was Hondo Harrelson (from SWAT). He took this role only grudgingly; because Steve had a pair of nunchucks, he wanted to be Bruce Lee, but that kind of went against the whole spirit of the game. Me, I was always Starsky.

The objective of the game was to disperse, hunt each other around outside, and shoot members of the opposite team with the capguns we had. I'd saved my money and bought a beaut--a black-and-silver .38 snubnose with a real cylinder that spun around. While some of my fellow players used big rolls of red paper caps, my gun had special ammo--a plastic ring of caps that fit onto the back of the cylinder and rotated around so that the real-action hammer could hit and pop each cap.

We played lots of games, my neighbors and I, but Guns is the one that I remember best because I really liked those shows we imitated, and I really liked running around and shooting my gun.

And somehow, I made it to age forty-six without ever firing a real one.

Until a couple of weeks ago.

Once word spread of my cancer, offers of "Let me know what I can do" came pouring in. When it was made by one of my former students--a vet who'd served in the Air Force and had posted a few of her firing-range escapades on Facebook--I told her that I had an interesting request for her. Take me shooting.

Now anyone who knows me well knows (or can guess) that I'm in favor of much stronger gun control laws, and that I consider the NRA's leadership and lobbyists to be among the biggest douchebags on our political landscape. But, I've always wanted to fire a gun, if for no other reason than to see what the excitement was all about.

My former student--let's call her Annie (as in Annie Oakley)--and her Glock 27 met me at an Oceanside firing range. It was crowded with both people and guns--long glass cases filled with revolvers and automatics, and wall racks holding up various rifles, shotguns, and assault weapons. I was asked to sign a sheet stating that I was not a felon, did not abuse alcohol or drugs, and was mentally stable. There were four people on staff--three men and one woman--and they were all professional, courteous, and extremely safety-conscious. When Annie was showing me how the magazine fit into her Glock, one of the staff members shouted at us to make sure that we weren't loading a weapon in the lobby (we weren't).

When our turn came, we were given a couple of targets and two heavy-duty pairs of headphones for noise protection. The rules required that we put them on before we entered the firing range. I should point out that even in the lobby, the pops of the guns from beyond the thick glass wall were loud. To get to the range, we even had to go through a "sound lock," where we opened and closed one big, padded door before we could open another one.

Inside the range proper, two things were immediately noticeable--the smell of gunpowder and the pops that were now BANGS. Annie and I had to shout at each other from two feet away, but those gun blasts had no trouble getting through our ear protectors.

We went to the far lane, where Annie hung up a target and then showed me how to load, hold, and aim the Glock. She fired a few shots to demonstrate before handing the weapon to me. 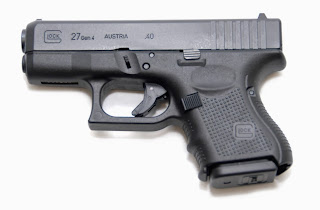 I don't want to make too much of holding the gun, but at the same time, I do. Without trying to be overly metaphorical, I would describe it as heavy. The gun itself looked like a toy; the Glock 27 isn't very big and has a short grip, so its weight was surprising to me. But more than that, holding the gun didn't provide that rush I'd felt as a kid. In truth, it was a little scary. This was an awful amount of power to hold--the power to do some serious damage to another human being. Maybe a lot of people buy these things with the sole intention of shooting targets, but I don't think so. At some point when a person buys a gun, he or she has to imagine pointing it at another human being. The idea certainly passed through my mind as I held it in my hand, and it made me feel a little sick. Part of this feeling, I'm sure, came from the chemicals lingering in my system. But part of it also came from the close proximity I've felt to death since mid-October in my thoughts, sure, but also in being around lots of other people in much more dire stages of cancer and chemo than me. I wondered if wanting to fire a gun was an effort on my part to exercise some control over death. If so, it was a failed effort; holding that Glock felt like shaking hands with someone I didn't want to meet, not ever.

All of these feelings were intensified when I fired it. Even though I'd watched Annie fire a couple of rounds, the force of that kick surprised me. And the noise, now exploding from about two feet in front of my face, was even louder.

I emptied the gun at the target about twenty-five yards away, and there was another full magazine waiting for me. Annie had told me to aim "center mass," and that's what I did--or tried to do.

"It's a stress reliever, right?" she asked as she passed another full magazine my way.

"Not really," I said, but I'm not sure my reply made it through the headphones. 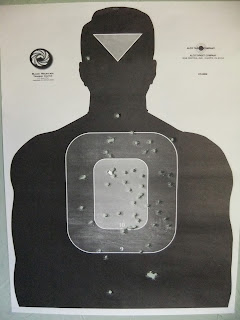 I kept waiting to get into some kind of rhythm or comfort, waiting for the excitement that I'd felt as a kid running around on those summer days with my fake .38 to kick in, but every time I pulled that trigger, the noise and jerk were sobering, and I couldn't help thinking that all of those cop shows and action movies that transform the noise, smell, and feel of shooting into entertainment are bullshit.

I walked out of the range glad that I'd finally done this thing but convinced that I wouldn't return.

But here's the weird thing: the further I get from the experience, the more that I think it might not be too bad to try it again.